Filmlance is producing the TV series TSUNAMI together with SVT

Who are you when the catastrophy hits? That is the questions in SVT’s new mini-series Tsunami, start shooting this autumn. The series is an original idea by Sara Kadefors (Sandor slash Ida, Orka! Orka!) who also have written the script. Tsunami is directed by Henrik Georgsson (Bron, Våra vänners liv) and is produced by Anders Landström/Filmlance in co-production with SVT and Film i Skåne. 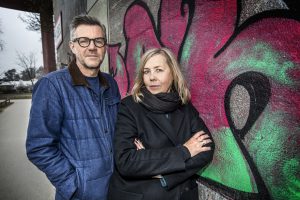 Tomas, director of an aid organization, is in the center of a handful of people’s lives. Ranya, his lover, is about to leave her cancer sick husband for him. Abbe, his friend and colleague, is trying to hide from him the fact that he’s stolen money from the organization. And Elina, an ambitious journalist, falsely believes she has evidence that Tomas is guilty of the crime. When he disappears in the tsunami several people have much to gain from his disappearance. The question is which direction their conscience will take them.

– This is a series about a numer of people which are touch by a big catastrophy, says scriptwriter Sara Kadefors. We tries to ask questions around moral, which responability you have as a human being and what’s really important.

Anna Croneman, Head of drama at SVT, is very happy for the series’ scripts:

– Why do we sometimes do something that violates our morals? That’s the question Sara twists and turns in this extremely well-written and strongly engaging drama, says Anna Croneman, and notes:

– It is exciting, moving and beautiful about how we behave when life is at its peak. If you like series of relationships, do not miss this!

The casting is currently underway and the shooting will begin in Malmö in October. Estimated premier in 2019.